If you watch nothing else this whole entire week – please watch this. I feel so touched and inspired to see such a collective effort to show solidarity in moving our country to one where no one “ever has to say ‘#metoo’ again”, as Oprah Winfrey says in her speech. Undoubtedly, we have a very long way to go, but it’s moments like this that still give me hope that there is a possibility that our country will one day provide a safe and promotive environment, where we can all live, work, and love without the threat of sexual harassment and assault.

“And I’m especially proud and inspired by all the women who have felt strong enough and empowered enough to speak up and share their personal stories. Each of us in this room are celebrated because of the stories that we tell, and this year we became the story.”

“But it’s not just a story affecting the entertainment industry. It’s one that transcends any culture, geography, race, religion, politics, or workplace. So I want tonight to express gratitude to all the women who have endured years of abuse and assault because they, like my mother, had children to feed and bills to pay and dreams to pursue. They’re the women whose names we’ll never know. They are domestic workers and farm workers. They are working in factories and they work in restaurants and they’re in academia, engineering, medicine, and science. They’re part of the world of tech and politics and business. They’re our athletes in the Olympics and they’re our soldiers in the military.”

“For too long, women have not been heard or believed if they dare speak the truth to the power of those men. But their time is up. Their time is up.”

“So I want all the girls watching here, now, to know that a new day is on the horizon! And when that new day finally dawns, it will be because of a lot of magnificent women, many of whom are right here in this room tonight, and some pretty phenomenal men, fighting hard to make sure that they become the leaders who take us to the time when nobody ever has to say ‘Me too’ again.” 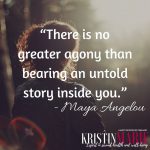 The Agony of the Untold StoryUncategorized