Black Infants are Twice as Likely to Die as White Infants. Why? 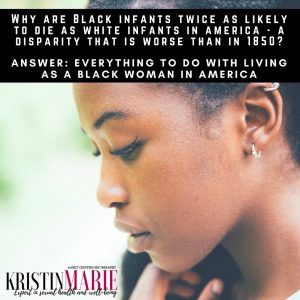 This @newyorktimes article is not a short read, but is well worth your time. Nothing can get my blood boiling more than hearing stories of women who expressed their needs to those they were turning to for care – yet those who could hear refused to listen. This article is a powerful, in-depth investigation into why there is such an egregious racial disparity between Black and White infant and maternal death rates. A major bonus is that author also provides a major hat-tip to the amazing doulas out there! Check it out!

From the article: “The reasons for the black-white divide in both infant and maternal mortality have been debated by researchers and doctors for more than two decades…For black women in America, an inescapable atmosphere of societal and systemic racism can create a kind of toxic physiological stress, resulting in conditions — including hypertension and pre-eclampsia — that lead directly to higher rates of infant and maternal death. And that societal racism is further expressed in a pervasive, longstanding racial bias in health care — including the dismissal of legitimate concerns and symptoms — that can help explain poor birth outcomes even in the case of black women with the most advantages.

When the black-white disparity in infant mortality first became the subject of study, discussion and media attention more than two decades ago, the high rate of infant death for black women was widely believed … to affect only poor, less-educated women — who do experience the highest numbers of infant deaths. This led inevitably to blaming the mother. Was she eating badly, smoking, drinking, using drugs, overweight, not taking prenatal vitamins or getting enough rest, afraid to be proactive during prenatal visits, skipping them altogether, too young, unmarried?

Additionally, ‘…persistent racial differences in health may be influenced by the stress of living in a race-conscious society. These effects may be felt particularly by black women because of [the] double jeopardy of gender and racial discrimination.’ People of color, particularly black people, are treated differently the moment they enter the health care system.”