What’s the Deal with the Hymen? 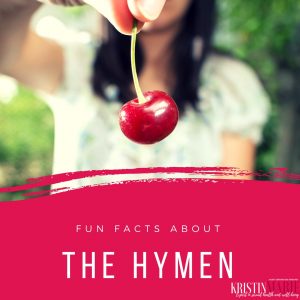 The hymen is not what the overwhelming majority of us have been taught it is. It’s not something that can be “broken” per se, nor is the condition of the hymen even remotely close to a reliable indicator as to whether or not a person with a vagina has had penetrative intercourse!!

The latest on the hymen is that it is actually a mucous membrane located at the opening of the vagina. Generally speaking – before puberty, the hymen encircles the vaginal opening and has a small hole in it, then as with most parts of the body, it changes during puberty and often ends up presenting closer to a moon shape by the time a person reaches adulthood. That said, every body develops differently to a degree and there simply is no one way to measure/predict developing bodies.

For those having consensual vaginal intercourse for the first time, the vagina has a fantastic ability to accommodate the penis or finger(s) through appropriate levels of arousal (especially lubrication). Interestingly, @emilynagoski writes in @comeasyouare that the most common pain experienced at first intercourse is more often due to lack of lubrication and *not* the tearing of the hymen.

That said, the hymen doesn’t have as much of an elastic capacity as the vagina. What we don’t hear enough about is that for many, the hymen is often (not always) flexible enough to engage in sexual activity without experiencing any injury, at all! For others, their hymen does undergo slight tearing and brings with it some bleeding – but it is very difficult to know just how many experience (rough estimate is 1/3 – 2/3 of women) this, as well as, whether the blood is actually coming from a torn hymen. Other common causes of bleeding include tiny tears or “microtears” from sexual activity in the vagina (usually from insufficient arousal/lubrication) and spotting from menses or stress. What’s important here is understanding that while 1/3 – 2/3 is still a large proportion for those who are thought to *maybe* experience hymen bleeding upon first intercourse, that is definitely not everybody!!⠀⠀⠀⠀⠀⠀⠀

All of this explains how uninformed so-called virginity tests have been throughout history – particularly when considering how horrific the consequences have been for those who didn’t “pass” such as BS” test (e.g. cultural stripping of honor, social shaming, refusal of employment, stoning, and even death, to name a few).

There is no biological or physical function of the hymen. it is simply something many cultures have made into a metaphor, a symbol representing something they want to believe about female sexuality.